After spending the day sightseeing in the city we headed for Oktoberfest. I actually didn't remember much about the outdoor part of it until I recently saw some photos I had taken. Part of that may be because it was so familiar to any state or county fair. Food booths and rides are primarily what I remember. But it is the beer halls that set this event apart and what the event is famous for. 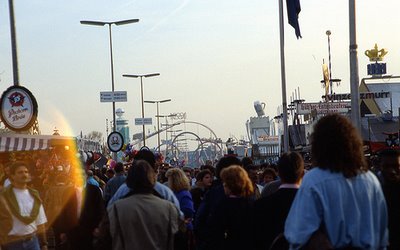 We poked our head in one or two different halls looking for space for six guys. We eventually found a table at the Paulaner hall. The atmosphere was something else. Women of all ages dressed in traditional garb carrying as many as a dozen 1-litre bocks of beer (that's over thirty pounds in each hand). Many of the younger (and cuter) ones came around selling pretzels and other baked goods. Of course, we six young men took kindly to one of them and made our best efforts to talk to her whenever she came by. The music was your traditional Oktoberfest fare. But there were two songs I remember in particular. First, apparently the 'chicken dance' is either German or an Oktoberfest favorite. They played that multiple times over the night. The other was something like a cheer or toast. Einz! Feinz! Sofa! Everyone clinks glasses and takes another swig of beer. 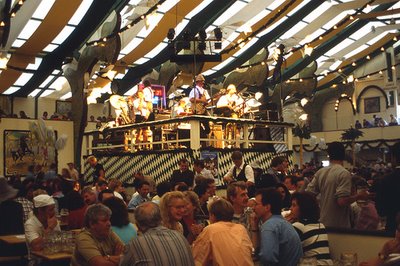 In between the times that the pretzel girl would swing by and talk to us, I remember that we toggled between talking about others around us and just sitting, observing, and drinking our beers. That was until the table across from us invited us over. It was a bunch of Munich high school kids whooping it up. We were soon goofing around with them having a great time. Singing, dancing, and trying our best to get to know each other even with the language barrier. We had a blast. We even exchanged phone numbers at the end of the night. The two I kept in contact with were Florian & Stephanie who I came back to see on two separate trips.

Unfortunately we did not have a place to stay, so we went back to the train station to find a train out of the city. In the end, we found a train headed for Salzburg, Austria. It was not a long ride and we would arrive in the middle of the night, but at least we would be away from the craziness of Munich.