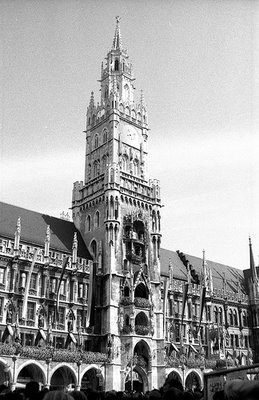 I was very much in the dark when this trip started. I had no idea what the plans were or where we were going. I was just a follower. That would completely change by the end of the trip.

There were six of us (Craig, Tom, Al, Mike, Paul, and I). The travel break started Friday afternoon and we boarded an overnight train to Munich on Friday night in Paris. We arrived bright and early Saturday morning with all the other backpackers arriving by train. The train station (Hauptbahnhof), the surrounding streets, and the entire city were flooded with people. It was Oktoberfest. It appeared that Tom was the leader of the group. He seemed to toggle between being very uncomfortable to overly confident in the roll, but we got around fairly well. 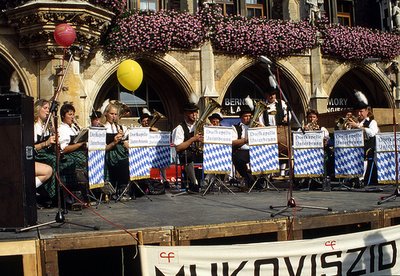 We first headed to a major pedestrian thoroughfare, Neuhauser Strasse, to the central city square, Marienplatz. In the square there was an Oktoberfest band playing and we returned there in order to hear the Glockenspiel chime. From my memory, we spent most of the day wandering looking at assorted tourist spots. We saw Peterskirche, Frauenkirche, ...We even spent some time in a sporting goods store for some reason. Al thought he would by some skis. Didn't make sense to me since he would have to lug them with us for two weeks. 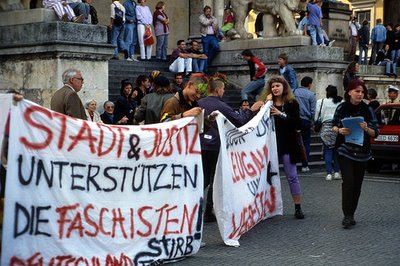 At one point we ended up in one of the city squares, Odeonsplatz, where some punkers were having a protest. It was a peaceful gathering. On the square is Theatinerkirche that we also visited. I'd like to note at this point that one thing I noticed over the course of the day was how may people dyed their hair. And not just the young kids. There were older women with streaks of purple or pink in their hair also. So we were standing around and a young gothic woman comes over. At the time I was also dressed in all black with a turtle neck. I had been letting my hair grow out also, so it was a bit longer than the normal "wedge" that I usually had. Well, she came up to me and said that they were looking for people to be in a Vidal Sassoon commercial. The thing was that I would have to stay overnight. Our plans were to leave that night and if I did it the others would leave without me. Plus I didn't have a place to stay. So I passed. I've always wondered if that offer was sincere. Could I have become an international model or been drugged and beat to a pulp?

We strolled some of the large avenues. From the photos I have, we visited Konigsplatz, which was a victory arch of very Third Reich character. There was also another victory arch that I have not been able to locate.

We later made our way to the Deutches Museum. A very very interesting technology and science museum with many moving parts displays. But it was all in German, so we could only conjecture what they were trying to show. We had a snack in their rooftop cafe then made our way to the major reason for coming to Munich. Oktoberfest.