We arrived in the early morning hours in Salzburg along with a few others escaping the craziness of Munich and their train station. Unfortunately, that meant the tourist information center was closed and we had no means of finding a place to stay for the night. So we stayed with the others in the train station and tried our best to get some rest on the floor.

The next morning we consulted the tourist office and got the directions to the local youth hostel. As with much of the lodging for young people across Europe, this was run by and inhabited by a large percentage of Australian nomads. From what I was told, the Australian government subsidizes their young people to take a year off, travel, and see the world. So there are many young Australian backpackers across Europe and many try to extend their stay by working in youth hostels for the cash to stick around. 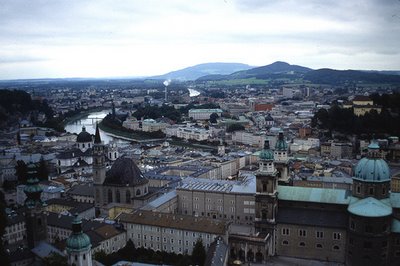 Salzburg was great. It's a small city stradling the Salzach River. On one bank is the old city squeezed between a hill and the river. The old city is almost entirely buildings that are over 100 years old. Primarily baroque in style, but there are also some gothic and romanesque buildings also. On the hill overlooking the city is the fortress, Festung Hohensalzburg. The city is known also for being the birthplace of Mozart and the Sound of Music was filmed here and in the Alps nearby.

We spent two days in the city and one of the first attractions we saw was the Mirabel Gardens. They were some very nice French style gardens with baroque sculpture. They were nice, but again after seeing Versailles it was hard to find other gardens too interesting. From there we crossed the bridge into the old town. The Old Town was amazing because it seems that great lengths had been made to preserve the character. I'm pretty sure they have the same zoning regulation prohibiting neon and lighted signage like in Quebec city. So the majority of store signage is done in wrought iron, even McDonalds. 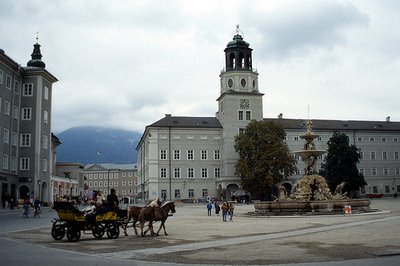 Speaking of. This was when we discoved one of the quirks of our fellow traveller, Paul. Paul requested at every possible chance that he eat at McDonalds (yes, I can hear you gasping). Here we are in new and interesting places with authentic foods, and he wants what we can get at home. Paul's reasoning was that he didn't trust foods at other places and he knew that McDonalds would always follow a standard of quality. So some extra time was spent looking for Mickey D's or waiting at them while he got his food. I later found out that he only made hamburgers at home when he was cooking for himself.

In the Old Town, we visited all of the churches and wandered through all of the streets. In the end we did not see any of the Mozart attractions or go on the Sound of Music bus tour. 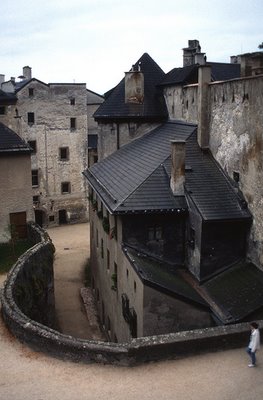 On the last afternoon of our stay we went up to see the fortress. It was quite the intriguing place. It was a huge complex and quite a maze with many different levels. We took the tour and the guide gave the descriptions in at least four different languages. It made for a longer time spent in each room, but you had time to look closer at them while she spoke to others in the group. And she seemed to speak each language flawlessly. We had a big surprise during the tour. As we were walking around, we peaked out of one of the windows and saw the Alps just across the valley. I was blown away because I didn't realize they were that close. And the view was fantastic. Since we had arrived in the middle of the night and spent our two days in the valley of the city, we never had a view of what was around. It was a pretty amazing surprise.