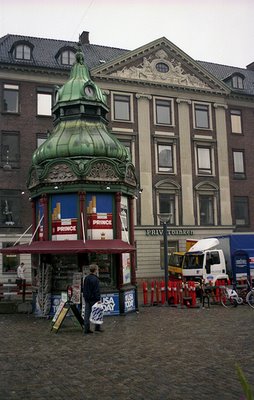 Copenhagen turned out to be another city where I didn't walk away with an eagerness and enthusiasm to return like I had with Munich, Salzburg, and Prague. Part of that may have been due to the cloudy/rainy weather we had while there. There also weren't any sites that really captured my attention and the tensions in the group may have also played a role. We were probably pretty fatigued at this point 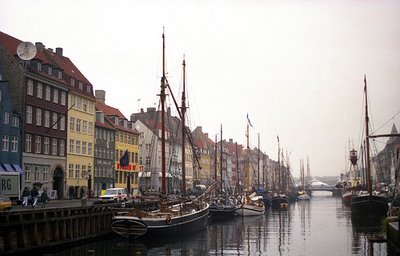 That said, it was a nice city. I liked the architectural style of the city. Part baroque, part nordic. Nyhavn (seen above) was very interesting with the uniform facades and all the old boats. Part of me was disappointed we didn't catch it on a sunny day. Though people seem to like the melancholy mood of the picture above. We also explored Rosenborg Castle and saw the Little Mermaid seen below. 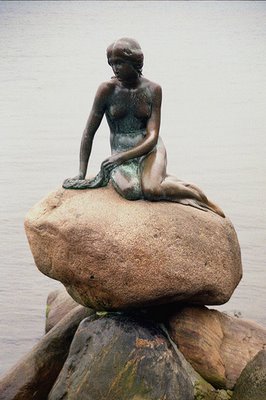 Our youth hostel was across the street from the Tivoli Gardens amusement park, but the park was closed for the season. We met three women from Kansas who were studying abroad in Holland. We talked to them quite a bit and I exchanged information with Lisa who I kept in contact with during the rest of the stay in Europe.

Another item I remember was how we ate. We found an all-you-can-eat pizza buffet soon after we got there. They had three or four different types of pizza that they would constantly replace. A few standards and a couple we had not seen before like Hawaiian or corn with ham. This is where our shoe-string budget won out over local cuisine. As we moved farther north, prices also rose. So we would stuff ourselves on the free breakfast at the hostel, starve until about 4pm, then stuff ourselves again with pizza over the next two hours. Silly, but we were young.

I remember when I visited Copenhagen in 1983, there were a lot of buffets. It was the only affordable way to eat. I ate at the buffet in the train station where there was even caviar - which I did not taste, I do not like caviar... I do not have many memories of that city, except that the people where friendly, more so than in the other Scandinavian cities I visited. They seemed a bit more "Latin" in some way. I went there in the fall and the sky was very grey...

That's interesting that we had a similar experience there. It took me a while to remember what happened when we were there. I wouldn't say I didn't like it because it was Scandinavian since I really liked Stockholm.