On our second day, Craig, Tom & Mike decided they wanted to go on a guided bus tour of East Berlin. I decided not to join them because I felt the city should be discovered on you own, I didn't think there would be anything interesting to see over there, and because of the growing tension with Tom. I thought the sites in West Berlin would be much more interesting. I really regret that decistion because it was my only chance to see East Berlin fresh from being unveiled from behind the iron curtain. Plus, Al, Paul, and I saw nothing of significance. We went to the zoo and wandered around the neighborhood. I really can't remember why we didn't venture more into the city. It could have been a lack of interest in this city on our part or inability to figure out how to get around. 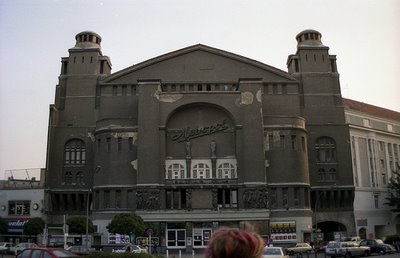 One night we went to the Metropolis night club. I was a frequent patron of dance clubs from about my mid-teens to my mid-twenties. Not to be part of "the scene", but because I liked dancing and like the atmosphere. The club was fairly standard. We arrived there early and watched one guy dance by himself in the middle of the floor doing some sort of pseudo-robotic dance. After about a half hour more people came and filled in the dance floor. I remember it being not too much different from back home, but it did have a German feel to it. We really enjoyed the music and if I remember right it was somewhere between house and industrial.

Overall, Berlin was not one of my favorite cities on the trip. Though now after many years of learning more about it, I have gotten interested to return and see the city properly.