In case there is still anyone following this blog, I've switched it over to Wordpress. I haven't written anything new, but I hope to start posting new items soon. So here is the newest incarnation of European Memoirs.
No comments:

Our school had a class day trip to Chartre which is not too far from Versailles. The day basically consisted of a tour of the cathedral and some time to wander around the city. We didn't do much with our free time, but just before we were to leave we found this quaint little section of town behind the cathedral. There is a river with some nice stone buildings as you can see in the photo below. 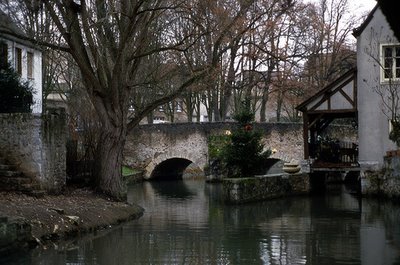 The rest of the city was very nice, though similar to many other French cities of the same size. 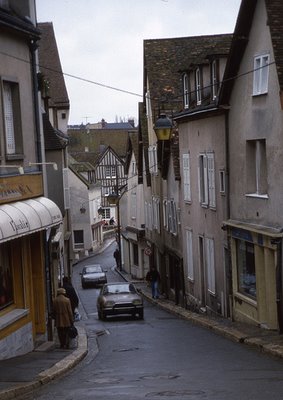 But it was the tour of the cathedral that made the trip so memorable. Our guide was Malcolm Miller. He is a scholar who has been "reading" the cathedral statues and stained glass windows since 1958. He compares the cathedral to a library with each stained glass window and statue arrangement being a book. During the tour, he walked us around and read some of the stained glass windows along with an assembly of statues. Some are graphic representations of stories from the bible complete with symbolic iconography. Others like the rose window also spell out numerous symbolisms and etymologies. If you were raised Christian or have a fair knowledge of it, the tour probably has your head reeling at the end. It is astounding how the creators of the elements of the building infused it with such a rich network of imagery and meaning. The tour was one of the highlights of my stay in Europe and a tour or lecture by Mr. Miller is highly recommended. Especially if you have time during a stay in Paris for a day trip to Chartres.
1 comment:

I arrived in Chamonix after a day of train travel and the discovery of a picturesque locale. It was early evening and I had yet to find a place to stay.

During the previous trip, we researched possible accommodations in the guide books. When we arrived we would locate them via the tourist office. Then we would find vacancy at one of the first two on the list. It was usually at the youth hostel since they had more than a couple in each place, it was off season, and they were big cities. In this case, it was a village and they had only one youth hostel on the outskirts of town.

I called the hostel and they said they were full with only a chance that a spot could open up. I decided that it was better to try my luck in town. I checked quite possibly every hotel in town. I was either quoted 288 francs ($58) or more or they had no vacancy. So I bit the bullet and paid the 288 francs. Quite a jump for me since I was usually paying half that. The upside was that I had a room and a bathroom to myself. I'm pretty sure it was the first time I ever had a hotel room to myself. 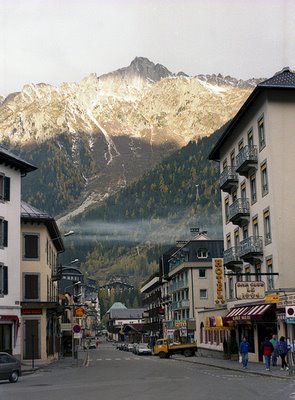 The next day after a big breakfast that was included with the room, I set off without any real plans. I found a slightly cheaper place to stay for 178 francs ($36) and wandered around the small village. It was not a very large town and it had no tall buildings. So it was composed primarily of three and four story buildings with primary streets parallel to the valley. All the while, the mountains tower over either side of the valley. Chamonix is at the base of Mont Blanc which is the tallest mountain in Europe. It is also a world-renowned downhill ski destination. But this was in between the summer tourist season and the ski season, so activity in the town seemed like any other. The style of buildings tended to be either traditional French stucco or alpine timber frames. A charming little town, but not really any more special than other small European towns.

After a tour of the city, I decided the thing to see would be the mountains. I returned to the tourist office to see if any of the ski lifts were operational. Unfortunately they were not in service because the forecast was for cloudy conditions later in the day which would prevent any chances to see anything. Having already seen the town, I figured I would try hiking up the side of the valley opposite Mt. Blanc to see if I could get up there before it clouded up or even get up above the clouds. So at 11:30am I started walking up one of the streets on that side of town until I found a trail. I had done quite a bit of hiking as a kid and I was a runner at the time, so I didn't have any concerns about the hike. I decided that I needed to be back by 4pm, so I split the available time in half and determine that I needed to turn around and head back down around 1:45pm. 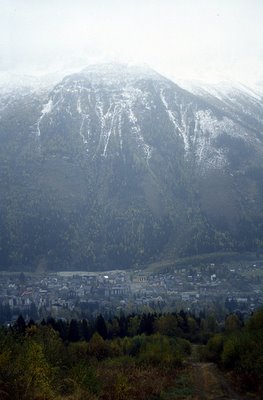 The hike up involved a few different progressions. The scenery changed from deciduous forest to sparcely scattered conifers to steep rocky terrain with patches of snow. The oxygen got more and more scarce with my ears popping from time to time. I had to stop at each switch back to catch my breath. The weather went from partly sunny to cloudy to spitting drizzle. Not enough rain for an umbrella, but enough to get drenched over an hour or two. Plus it was starting to get pretty windy toward the top. 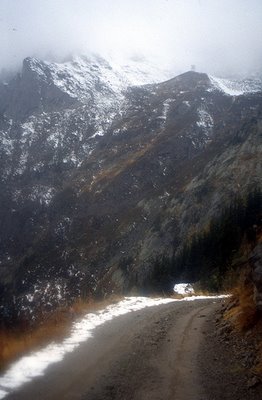 I just kept climbing thinking I would either get above the clouds or reach the top and see over the other side. Finally when it got to be half an hour past my turn around time, I headed back down. The top was very close, but I was drenched and cold. Water had even gotten into my camera. And I also did not want to head down in the dark. It took me 2 1/2 hours to climb 965m (4000ft). But it only took 1 1/2 hours to get back down. Although I wish I could have gotten to the top, the landscape was worth the climb.

The next day was bright and sunny for another day of train travel with multiple transfers. A nice ride with great views of the fall colors. Although my experience in Chamonix was less than perfect, it would be nice to return if I'm in the area.

After learning how easy it was to get around Europe, I was eager to venture out on my own. We had a three day weekend so I decided to see the French Alps and see if the leaves were changing color. After consulting guide books, Chamonix had the most appeal. The route to get there involved several trains and transfers. I took my first TGV (French high speed train) from Paris to Lyon. Then I took the regular train from Lyon to Annecy. From Annecy there was a train to St-Gervais where I transfered for the final train to Chamonix. 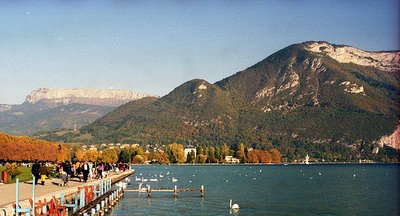 The layover in Annecy was two hours, so I had time to quickly check out the city. What a beautiful city! It is situated on a lake at the foot of the Alps as you can see in the photo above. The town itself was quite old with a canal and promenade along it. It was very picturesque as you can see below. The canal with swans and waterfalls. The old buildings lining it. The promenade littered with bistro tables, and the mountains looming behind. There was also a large lakeside park that was teaming with people strolling, lounging, and playing sports. The lake was quite active with sailboats taking advantage of the windy day. 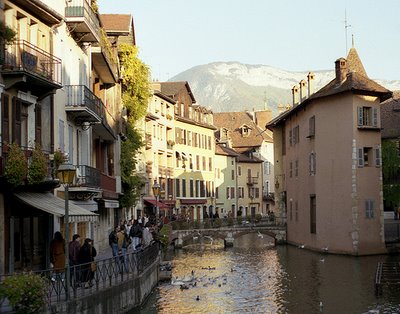 It is definitely a place to visit if you are in the region.
No comments: