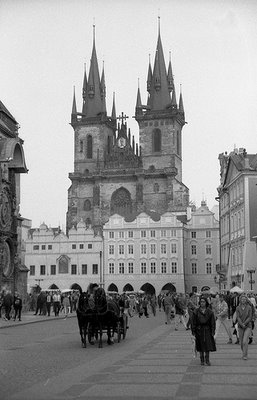 Prague is a great city and one of my favorites on the trip. It was definitely the most exotic place we had been to so far. The city was very dirty. Every building seem to have a layer of soot on it. And not speaking the language made it difficult at times. But it was so well preserved. I don't remember very many buildings built since the baroque period. And everything seemed to be in the baroque style. I'm pretty sure it was also the city where we spent the most time. At least three days, maybe four. So we had the time to cover all the sites of the city very well and have time to do other activities like take photos or visit a "club". I'll get more into that in the next post. So what did we see.

One of the main sites is the Old Town Square. It is located in the center of the old part of town with two churches and the Old Town City Hall overlooking it. It became a major meeting point for our group and other people we met up with. On the square is also Orloj, astronomical clock, seen in the photo below. 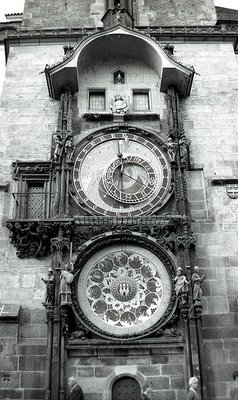 Not far from the square is the Old Jewish Cemetery. It is a very small piece of land and the gravestones are sitting at all different angles. I actually remembered the cemetery from an INXS video that had been shot in Prague three years before. In it Mike Hutchence saunters along a path in the cemetary while Kirk Pengilly plays his sax on the street below for Never Tear Us Apart. It is so cool that nowadays I can link to the video on YouTube and you can see what I remember.

Walking to the west of the city, you come to the Vltava River . One the main ways to cross it is by the Charles Bridge. The city actually has a well beaten path that tourist take between the Old Town Square and the Prague Castle. The bridge is quite something. It is a pedestrian bridge lined on each side with statues. And along the whole length there are artisans and musicians. Quite a pleasant walk. And at each end are gothic towers in a style very unique to Prague. A tall steep center roof with small steep turrets at the corners. The towers of Tyn Cathedral have the same configuration. 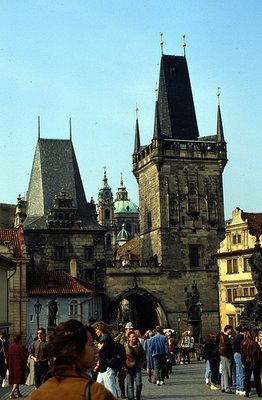 Past the bridge, you make your way up to the Prague Castle and St.Vitus Cathedral. The castle is one ofthe largest in the world with numerous buildings and outdoor spaces. They even had a architecture exhibit that we spent a few hours checking out. I really liked St. Vitus Cathderal. It was very bright and had that verticallity that I really like. The facade is in the high gothic flamboyant style as you can see in the photo below. Another of my favorite churches in Europe. 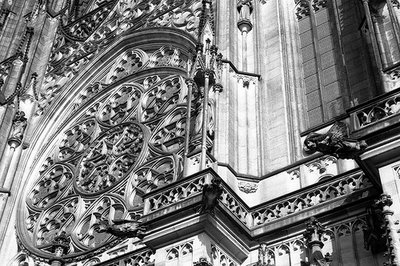 The only other site I can remember is the miniature Eiffel tower on the castle side of the river. We climbed up, but I don't have any pictures so the view must not have been very good.

As a group, we were starting to get on each other nerves a bit. Tom, who had taken over the leadership role, was not doing a great job of getting us around. I tend to be good with maps, so I started taking over getting us from place to place. Tom also had a tendancy to be a know it all which rubbed a few of us the wrong way. On the other hand, I got along great with Craig and we spent a lot of time traveling together on future trips. Craig was caught in the middle on this trip since he got along with both Tom and I.

Prague was really a great city and I hope to be able to return someday.